The Vista class are a series of medium-size cruise ships.  Most of these ships were built for Holland America Line.  However, one of the ships sails for P&O Cruises.  In addition, there are modified versions of the Vista design sailing not only for HAL but also for Costa Cruises and for Cunard Line,

All of the Vista Class and its derivatives were built by the Italian ship maker Fincantieri.  The first one to enter service for HAL was Zuiderdam (2002).  She was followed by Oosterdam (2003); Westerdam (2004) and Noordam (2006).  The names of the four ships are derived from the Dutch words for the various points on the compass.

The four HAL ships have nearly identical interior layouts.  The ambiance of the public area is like that of a cultured but relaxed hotel.  Each of ships has a museum-quality art collection enhancing a contemporary décor.  Daytime activities include classes on computers and things digital as well as cooking demonstrations.  Evening entertainment includes live classical music performances and live blues/soul music.  HAL's offerings are often in connection with name brands such as Micorsoft, America's Test Kitchen,  Lincoln Center, BB King and Billboard,   In addition, the ships have a large spa,  a theater, bars, and a large pool area that is covered by a retractable magradome.  Although each ship has a good-sized children's area, most passengers are mature.

Carnival Corporation's order for the Vista ships was for five ships.  The fifth ship was also ordered with HAL in mind.  However, Carnival decided to give that ship to its Cunard Line brand to compete with P&O Cruises in the British cruise market.  However, when Carnival merged with P&O, the plan for Cunard to have cruise ships that would compete with P&O no longer made
sense.  Therefore, the fifth ship was transferred to P&O where she became Arcadia.  Still, in the right light, one can see the ship's Cunard name “Queen Victoria” on the stern.  Arcadia also has a Cunard-style mast like on Queen Mary 2.

Arcadia entered service in 2005.  She has a contemporary interior and is operated as adults-only ship.  Most passengers are from the British Isles.

The five Vista class ships are approximately 82,000 gross tons and have dimensions that enable them to squeeze through the original locks of the Panama Canal.   They are propelled by two ABB azipods and are equipped with bow thrusters. 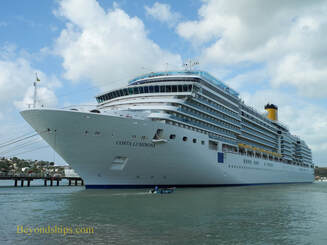 Costa Luminosa
The Vista design proved popular and Carnival Corporation has used modified versions of the design for several of its lines.
HAL's Eurodam and Nieuw Amsterdam are very similar in layout and decor to HAL's four Vistas but they have an additional deck, which among other things, allows these ships to have an additional purpose-built specialty restaurant.

Cunard's Queen Victoria and Queen Elizabeth are lengthen versions of the Vista design.  In addition, their bows have been
strengthened in order to meet the demands of transatlantic crossings and world cruises.  The modifications have the added benefit of
increasing the ships' transverse stability.  While there are some similarities between the layouts of the Cunard ships and their HAL cousins, there are differences and the atmosphere is quite different.