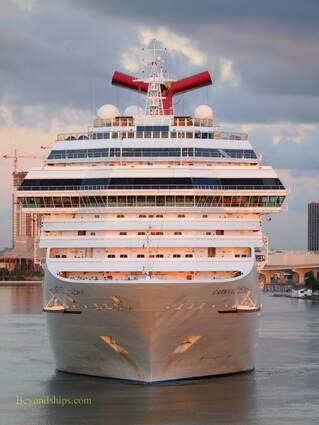 Carnival Glory
The five ships of Carnival Cruise Line's Conquest class have been the work horses of the fleet for over a decade. They offer a cruise experience that is what most people think of when they think of a Carnival cruise. The atmosphere is casual and there is an emphasis on having fun. Equipped with an array of features, they offer guests alternatives. They are also family-friendly with programs and features for kids. The quality is good and the fares are affordable.

The lead ship in the class was Carnival Conquest, which entered service in 2002. She was followed by Carnival Glory (2003); Carnival Valor (2004); Carnival Liberty (2005) and Carnival Freedom in 2006. All five were built in Italy by Fincantieri.

They are all 1110,000 gross tons and 952 feet long. Thus, they are big but not as big as Carnival's most recent ships. Indeed, in comparison to some ships in other cruise lines, they could now be described as almost medium-size.

The Conquest design was based on the Destiny-class design. As a result, the Conquest ships had a similar layout to and bore a family resemblance to the three Destiny ships (Carnival Destiny, Carnival Triumph, and Carnival Victory). However, the Conquest ships were 57 feet longer; had an additional restaurant and had more passenger cabins. Now that the Destiny-class ships have been transformed into the Sunshine class, the layout is no longer the same. However, the exterior family resemblance still remains.

All of the ships were essentially identical when they entered service. However, each ship had a different decorative theme. For example, Conquest's theme was “French Impressionists” while Valor's was “Heroes and Heroics”. The décor is often quite imaginative and is consistent with Carnival's mantra of promoting fun.

The ships have been updated over the years. Thus, they have many of the features of Carnival's newest ships. However, the updating process can mean that some ships have features that others do not. For example, as of this writing, Carnival Glory and Carnival Freedom have more extensive waterparks than their sisters. 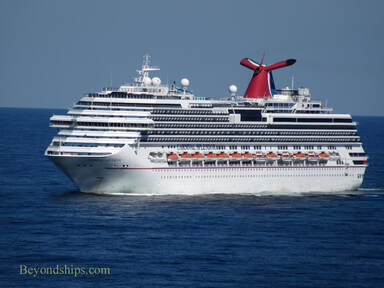 Carnival Splendor is very similar to but is slightly larger than the Conquest class ships. The most notable difference is that Splendor's main pool area is enclosed by a retractable Magradome.

This ship was originally ordered for Carnival's Italian affiliate Costa Cruises. However, during construction Carnival Corporation decided to allocate it to Carnival Cruise Line. Thus, even though Carnival Splendor is listed as being the only ship in the Splendor class, she actually had five nearly identical sisters. One of those, Costa Concordia, was tragically lost off of Italy due to human error.

Splendor was also involved in a well-publicized incident in 2010 when an engine room fire left her adrift without electric power for propulsion or hotel services. An additional diesel generator has since been installed.
Cruise ship class profile and review - - Carnival Cruise Lines - - Conquest class